Overview of commercial microgravity applications. Both for terrestrial use and in-space use. Listing and analysing potential business opportunities to make unique profitable materials and products in microgravity.

Factories in Space is the largest public database of companies active in the emerging in-space economy and in-space manufacturing fields. 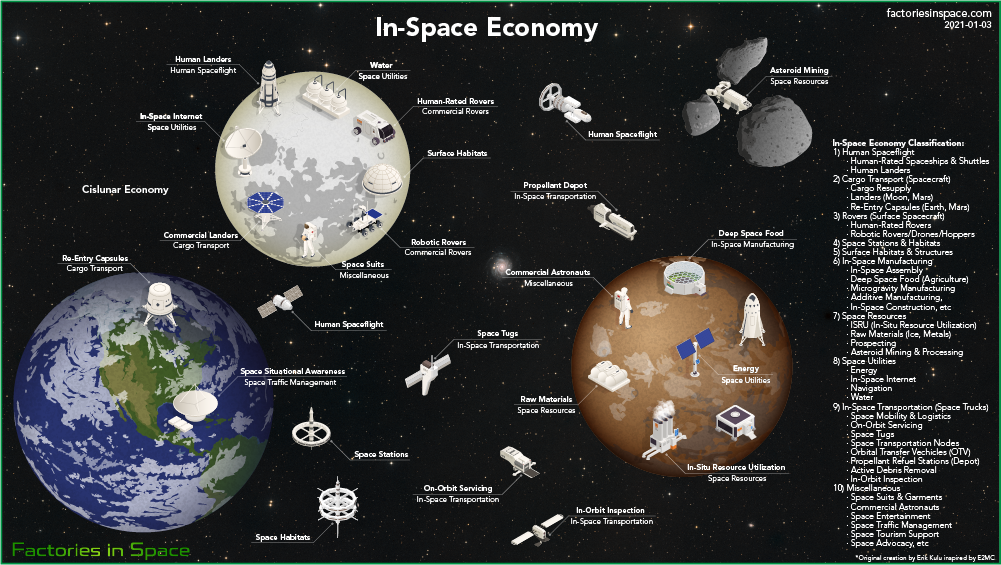 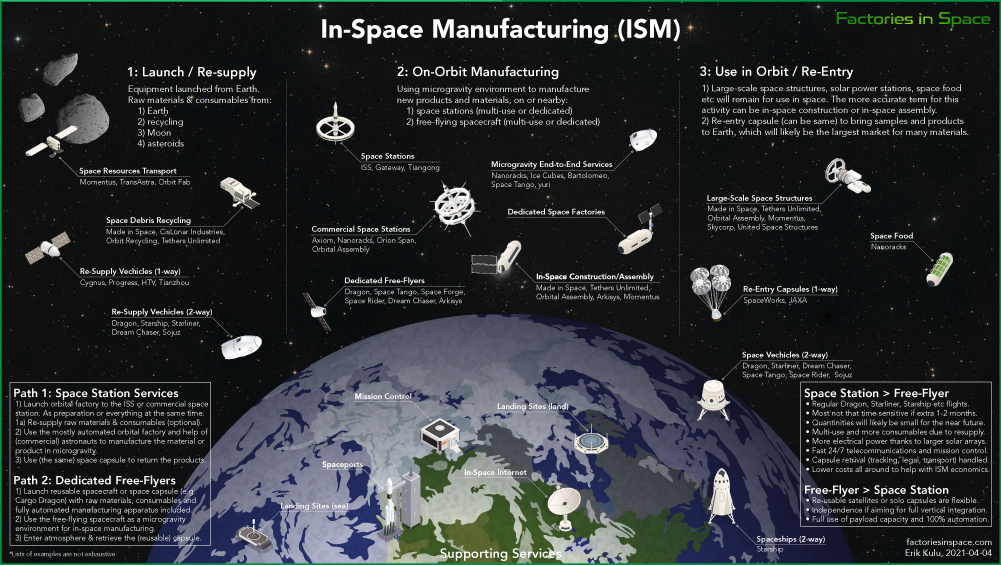 We need new economic drivers for spaceflight. Something new and potentially bigger than any existing space industry such as telecommunications, remote sensing, launch and research. This is the missing piece to speed up development for the exciting Star Trek-like future. I believe in-space manufacturing will be the kickstarter and foundation.

Some more thoughts in my interview What excites you about in-space manufacturing? with Filling Space. There is much more to say and especially do.

If we can establish a Mars colony, we can almost certainly colonize the whole Solar System, because we'll have created a strong economic forcing function for the improvement of space travel. Once we have that forcing function, and an Earth-to-Mars economy, we'll cover the whole Solar System. But the key is that we have to make the Mars thing work. If we're going to have any chance of sending stuff to other star systems, we need to be laser-focused on becoming a multi-planet civilization. That's the next step.

To those of us who feel that space manufacturing offers great potential for human benefit, such a delay seems nearly criminal, but on the time-scale of human existence a mere fifteen years is hardly the blink of an eye.

Most important, in a practical sense, would be the construction of factories that could make use of the special properties of space — high and low temperatures, hard radiation. Unlimited vacuum, zero gravity — to manufacture objects that could be difficult or impossible to manufacture on Earth, so that the world's technology might be totally transformed. In fact, projects might even be on the planning boards in 2019 to shift industries into orbit in a wholesale manner.
Space, you see, is far more voluminous than Earth's surface is and it is therefore a far more useful repository for the waste that is inseparable from industry. Nor are there living things in space to suffer from the influx of waste. And the waste would not even remain in Earth's vicinity, but would be swept outward far beyond the asteroid belt by the solar wind. Earth will then be in a position to rid itself of the side-effects of industrialization, and yet without actually getting rid of its needed advantages. The factories will be gone, but not far, only a few thousand miles straight up.

Earth
Make novel materials and products in microgravity and bring back to Earth for terrestrial markets.
Space
Make large-space structures or new products in space for consumption or utilization in space.

Earth
Materials and products that can not be manufactured or are much better.
Space
No requirement to survive launch loads.
Size is not limited by the launcher fairing.
Use in-situ space resources or recycle existing.

Global Trends Space manufacturing is coming. What are the supporting macro trends?