SAB is working to a project called IOSHEXA (In Orbit Servicing HEXA).

This project is referred to the SAB development of a ‘motorized’, i.e., equipped with a propulsion subsystem, dispenser based on the SSMS Dispenser structure. This hexagonal space tug will be offered in the launcher service market as a viable and more cost-effective alternative to micro-launchers and as a solution for in-orbit servicing to meet even the most demanding requests from secondary customers. Such a motorized dispenser, in fact, would allow to take advantage of the adapter carrying structure, thus limiting the launch capacity costs, on one side, and on the other side it will guarantee the flexibility to target payloads which otherwise would have to fly with the micro-launcher.
The aim of this space tug is to release small satellites on SSO, LEO, and even beyond Earth orbits and to perform the most innovative activities in terms of in-orbiting services. In particular, the modular structure is able to release micro and nanosatellites on different orbits, but thanks to the robotics being implemented (5-DOF robotic arms) it is able as well to perform In Orbit Servicing missions such as Debris Capture and Active Debris Removal, Cooperative Attitude and Orbit Control System Takeover, Assembly and Disassembly of Satellites. As future development the system will be enhanced also with the sub-systems necessary to be able to perform missions like refuelling and In Orbit manufacturing.
The In Orbit Demonstration Mission (IOD) of IOSHEXA is planned for 2025. Such a mission will demonstrate the capability of releasing CubeSats into intended LEO orbits (500-800 km) and then of performing manoeuvres to approach a space debris (i.e., the OHB SAFIR-2 satellite) showing the capability for In Orbit Disassembly. 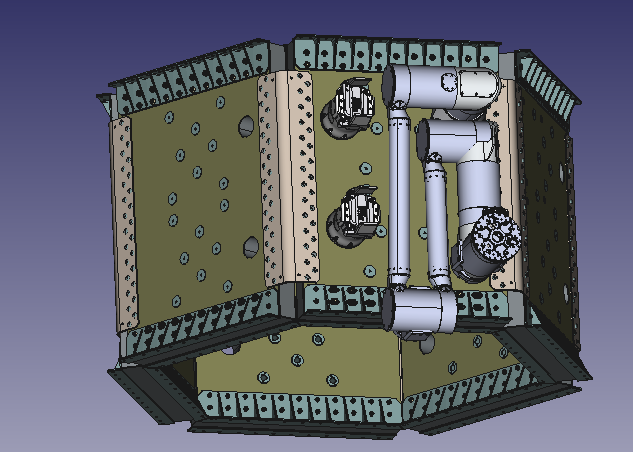